You are here: Home / News / Bettendorf student a finalist in Google Doodle contest 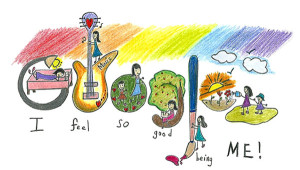 A second-grader from Bettendorf is this year’s Iowa finalist in the annual Google Doodle contest, where students create art using the letters in the name of the search engine.

Google spokesman Patrick Lenihan says this is the 8th year for the competition.

Out of more than 100,000 submissions, there are 53 state-level winners in five age categories and Google users are now voting online for their favorites.

“Every state winner gets a tablet PC and a sweatshirt, which is nice,” Lenihan says, “and we’re also giving in-kind donations to schools based on their doodles. In a lot of cases, we’re giving donations of art supplies or sports supplies, book donations for their libraries, every school gets a little something.”

The theme for this year’s contest is “What makes me…me.” The Iowa girl’s doodle features a rainbow and several drawings of herself doing things she loves, including: reading, drawing, playing music and gardening. The national winner will get a $30,000 college scholarship and his or her school will receive a $50,000 Google for Education grant toward the establishment and improvement of a computer lab or technology program. That winner will also win a trip to California.

“They’ll work with the Google Doodle team here at Google in Mountain View to put their doodle up for the day on the Google homepage,” he says, “which is pretty cool.” That doodle will have instant global fame. Google says the service is used for more 40,000 searches per second, or around 3.5 billion searches per day.

Voting is open through February 22nd. The winner will be announced March 21st. To vote, just go to Google and type in “Doodle 4 Google“.