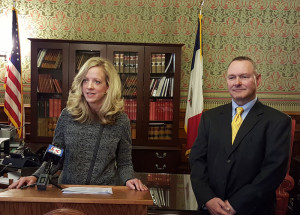 Iowa’s treasurer is pitching a plan to provide private sector workers with a retirement account, if their employer doesn’t already offer such a savings plan.

Michael Fitzgerald says “Retirement Savings Iowa” would be modeled after another program run by his office.

“We had such great success 18 years ago when we started College Savings Iowa, we now believe this is a great opportunity to give Iowans the same type of opportunity for saving for retirement,” Fitzgerald said.

The government-run program would provide retirement savings options for small businesses that do not currently offer retirement plans. Fitzgerald cited an AARP report, indicating a lot of Iowans may not be saving money for their future. “They say 42 percent of the people who work in the private sector do not have access to an employee-sponsored retirement account,” Fitzgerald said.

Fitzgerald believes the legislation should include a mandate for employers to offer the Retirement Savings Iowa to employees. However, it not apply to Iowa businesses that already offer retirement savings plans. Employers would not need to contribute to the program.

Senator Janet Petersen, a Democrat from Des Moines who chairs the Senate Commerce Committee, is endorsing Fitzgerald’s proposal. “There are so many Iowans who work in small businesses, and women in particular, who don’t have money saved for retirement,” Petersen said. She calls the idea a “no brainer” and believes lawmakers from both sides of the aisle will support it.

“I’m hopeful this will be a bipartisan effort,” Petersen said. Fitzgerald said contributions to the savings plan would come from automatic payroll deductions. The legislation calls for $1.5 million to establish and manage the Retirement Savings Iowa program. Fitzgerald said, if approved by lawmakers and the governor, he believes the fund could be up and running by July 2017 or possibly July 2018.