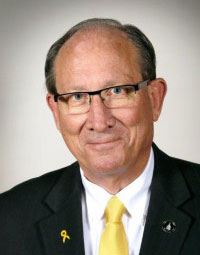 Three Republicans have joined all 26 Democrats in the Iowa Senate in voting for a bill that would “terminate” Republican Governor Terry Branstad’s plan to shift 560,000 Medicaid patients in Iowa into managed care plans.

“We need to put a dagger in this,” said Senator David Johnson, a Republican from Ocheyedan. “It’s moving too fast.” Johnson said it took Minnesota 20 years to make such a shift, while Iowa is trying to do it in less than a year.

Senate President Pam Jochum, a Democrat from Dubuque, has an adult daughter with intellectual disabilities who gets health care coverage through Medicaid. Her daughter’s doctors haven’t signed contracts with the private managed care companies that soon will run the program, so she’s calling doctors in Wisconsin, Iowa City and Cedar Rapids who have.

“I spent an entire day on the phone and got no where,” Jochum said. “Had no idea by the end of all those conversations who to even sign my child up with.”

Jochum said she and other senators are hearing those kind of stories from hundreds of Iowans who are the caregiver for their child, their sibling or their parent who can’t negotiate the system themselves and they’re expressing “frustration, confusion, chaos,” according to Jochum.

“You voted for this,” Schultz said. “You own this also.”

Schultz accused Democrats of trying to play a game of “hot potato” with the governor.

“Perchance you’re not planning on this bill going all the way through,” Schultz said. “Maybe this is just for the cameras. Maybe this is just to tell the people back home that you’re fighting for them, even though you signed onto this plan yourself.”

Senator Amanda Ragan, a Democrat from Mason City, said it’s time to slow things down and develop an alternative plan to serve the Iowans who depend on Medicaid.

This senate bill will not be considered in the Republican-led House, however. House Speaker Linda Upmeyer, a Republican from Clear Lake, suggested it’s a waste of time to pass a bill that will be vetoed by Governor Branstad.

“But secondly, isn’t this a point in time that we should all be focused on moving forward?” Upmeyer said late this morning. “Shouldn’t those people who are unaware or who have difficulties within this plan — which has not gone forward yet…Shouldn’t we be helping that happen?”

Governor Branstad’s administration hopes to start switching Medicaid patients into privately managed care March 1, but must obtain a federal waiver to do so. Federal officials ordered a 60-day delay in December, along with a list of steps that had to be taken to address “chaos” associated with the switch.