You are here: Home / Human Interest / Iowa man tells story of Iwo Jima and transformation of his life 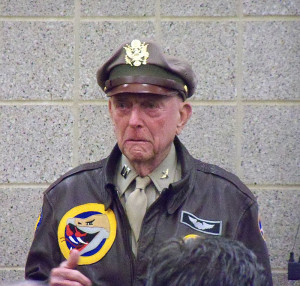 The Gold Star Military Museum at Camp Dodge held a special screening of a documentary Thursday that includes a veteran from Iowa.

Jerry Yellin flew a P-51 Mustang fighter plane during the Battle of Iwo Jima in World War Two. In the documentary he joins other U.S. veterans who returned to the small island last March on the 70th anniversary of the battle to meet with some of the Japanese they once fought.

Yellin says it was not an easy thing to return and relive some of the bad things that happened. Yellin says it is hard each time, as he went back in 2010 and then again for the documentary in 2015 and is going back again this year. The island was returned to the Japanese and they now allow veterans to visit once each year.

Yelling is a native of New Jersey, but moved to Fairfield after the war and spent much of his life there. He talks in the documentary about the trouble he had with the things he had seen during the war, and how he hated the Japanese people. That started to change after his son married a Japanese woman. It culminated with Yelling and other veterans meeting one of the few Japanese survivors of the battle in their return to Iwo Jima. 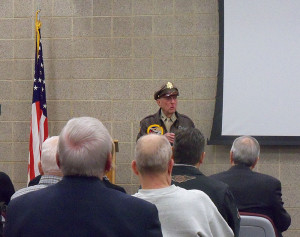 Jerry Yellin talks about his experiences before a showing of the documentary.

He now talks about the need for people to get along in the world. Yellin hopes people will see his story and realize the sacrifices that were made for the country.

“When I grew up during the depression, we became united in poverty. And when I joined the military I learned all about the other guys, all about you. And life is not about me, it is about you,” Yellin says. He says the sense of pulling together for each other has changed.

“We became a nation, maybe a world that only cares about themselves. A nation about me, individually it’s about me,” Yellin says. “And if we don’t change that and somebody starts a nuclear war, we are going to destroy the airplane we live on called the earth. It will become uninhabitable.” Yellin served as the national spokesperson for the celebration last August to mark the 70th anniversary of the end of the war. He now works with veterans teaching them transcendental meditation to help them overcome Post Traumatic Stress Syndrome.

Yellin flew the last combat mission in Japan before the end of World War Two, and says his last goal is to become the last living World War Two veteran. “That’s what I’d like to be. I want to the last guy who served his country in the United States. That’s not gonna happen because if somebody enlisted in 1945 for two or three days, they would be 88, and I’m 92,” Yellin says.

The documentary “Iwo Jima: From Combat to Comrades” is available on the PBS website.