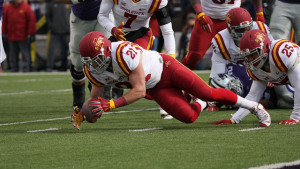 The football career of Iowa State linebacker Luke Knott is over. The former Waukee High School standout has decided to forgo his final season of eligibility.

Knott, who will graduate in the spring, cited the multiple hip surgeries he’s endured in his four seasons on the team and a job he already has lined up after graduation as reasons for leaving the team.

Knott started five games in his redshirt freshman in 2013 before a hip injury which required surgery ended his season after six games. He had hip surgery again a year later.

“Obviously, I thought about this a lot. Two years ago when I had my first hip surgery, my first thought was, ‘I’m a 19-year-old kid and I am having hip surgery?’ I made the decision to take it head on, go through rehabilitation and keep playing football. Then I had hip surgery again a year later. That was the first time I thought that football may not be in the best interest for me.”

Knott’s most productive season was in 2014 when he was third on the team in tackles with 74. He ended his career with 140 tackles.