You are here: Home / News / Iowa Lottery looking for winners of two big prizes about to expire 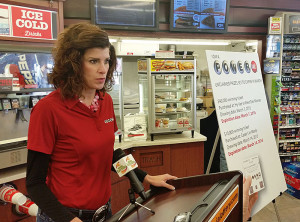 The Iowa Lottery is searching for two unclaimed Powerball winning tickets that are set to expire next month.

Lottery spokeswoman Mary Neubauer says a $10,000 Powerball prize-winning ticket was sold at the Casey’s in Manly for the drawing on March 14th of last year. That ticket matches four of the first five numbers and the Powerball.

A $40,000 winning ticket was sold at the Hy-Vee on Jordan Creek Parkway in West Des Moines for the drawing on March 7th. That ticket also matched four of the five numbers and the Powerball, and also had the Power Play option to quadruple the prize.

Those tickets will expire one year after they were purchased. Neubauer appeared at a news conference at the store in Manly. “We hope that maybe by giving this reminder it will make someone go find that ticket they have on the sun visor in their car, or sitting on their dresser at home, or stuck in their wallet, and maybe they will check it in time. So, that’s why we do this,” Neubauer says.

She says most tickets of this size are cashed in before they expire. “Usually when you get to a prize of this amount, it’s something people pay attention to. It’s something that obviously people want to claim,” Neubauer says. “But a handful to times a year a prize of this size expires. It’s kind of unusual that we have two prizes this big like this here in Iowa that are unclaimed.”

Neubauer says about $1.3 million in lottery prizes go unclaimed in Iowa each year. Most of those were small prizes like three or four dollars, but that money adds up over time. A handful of those unclaimed prizes would have been of this size, which she says it’s sad.