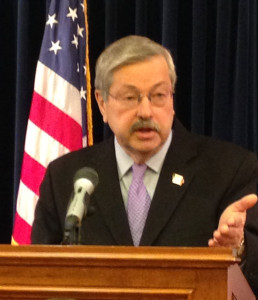 About 1,800 Iowa kids who’ve completed third grade, but are having problems with reading will participate in a pilot project this summer.

Governor Terry Branstad announced this morning that he’s raised nearly $2 million for the project by reallocating money from within state government, along with $1.3 million in private contributions.

“Nearly 25 percent of the third graders did not read proficiently in 2014/15 on state tests, so this is an important step towards learning how we can do more to help students who are struggling to learn to read,” Branstad says.

About 40 school districts have already signed up for the pilot project. A licensed teacher will run each class — for about 15 students. One of three approaches to accelerate reading proficiency will be employed.

“Then we can evaluate and see what is the most effective and then hopefully utilize that throughout the state,” Branstad says.

In the spring of 2017, students in third grade who fail reading proficiency tests will be required to go to summer school. Local school officials will decide how long those classes will run.

“From the school districts that have already committed to participate, I can tell you that on average students will be in classrooms for about three hours per day, four to five days per week, for about four to six weeks of the summer,” says Deborah Reed , director of the Iowa Reading Research Center at the University of Iowa.

Governor Terry Branstad plans to ask legislators to set aside $9 million in state tax dollars next year for this reading initiative. All third graders who cannot read at grade level will be required to participate in 2017, but they’ll be able to advance to fourth grade in the fall of 2017 regardless of their performance.

“We made a commitment to every kid in Iowa tbat we’re going to do all we can to try to make sure they can learn to read effectively so then when they go on beyond third grade they can learn their other subjects,” Branstad says.

The third-grade reading issue was addressed in an education reform package that cleared the legislature in 2012.

AUDIO of governor’s weekly news conference, where program was discussed