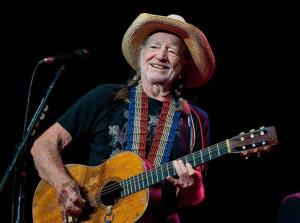 The lineup for the second annual Hinterland Music Festival was revealed late last night. Organizer Sam Summers says he tried to land Nelson for the inaugural event last summer, but he’s thrilled it worked out this year.

“He’s such a genre defying artist. I think he appeals to all ages and it makes a lot of sense for the festival,” Summers told Radio Iowa. “He was obviously our number one choice going into this year. I’m glad it all worked out. I know when I got the call my wife and I were celebrating.” Willie Nelson will turn 83 in April.

The Hinterland Music Festival is scheduled for August 5-6 at the Avenue of the Saints Amphitheater in St. Charles, about 30 miles south of Des Moines. Last year’s festival was moved to St. Charles just days beforehand due to flooding at the planned venue — Des Moines Waterworks Park. Summers felt the site worked well enough to keep the festival in St. Charles this year.

“The space ended up working really well. Obviously, there are a few things that we can improve on and we will improve on for this year. But, overall I think it was great,” Summers said. “The sight lines were excellent. The artists had a great time and I think it captured that rural vibe that we were looking for.” The Hinterland Music Festival is expected to draw around 20,000 music fans over two days.

Tickets and camping passes go on sale this Friday at 10 a.m. Some of the other musical acts booked for this year’s festival include singer-songwriter Ray LaMontagne, Grace Potter, Cold War Kids, and Shovels & Rope.