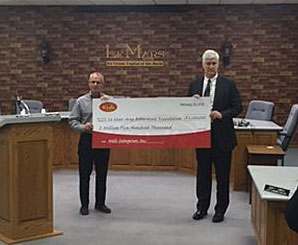 Wells Enterprises, the maker of Blue Bunny ice cream, pledges to donate $2.5 million over seven years to the city of Le Mars, where the company is based.

Wells CEO Mike Wells says the contribution is the company’s way to help enhance the quality of life in the northwest Iowa town.

The donation is a challenge matching grant. Le Mars city officials will now seek donations from other businesses, industries, and residents, so Wells will match every dollar up to the $2.5 million. This marks the second time in nearly a dozen years that Le Mars and Wells have cooperated on community improvement projects.

In 2003, the company donated $1.5 million over a ten-year term. That money went to create a recreational trail, expanded the golf course from 18 to 27 holes, and helped establish several city parks. Wells notes, the city was able to match that original contribution with private donations.

“We believe in public-private partnerships and once again, this is that opportunity,” Wells says. “We hope that our lead on the private side allows others to step up, join us and come along side by side in raising this important money.”

“A lot of the residents want a lot of things,” Knapp says. “They always want things and things cost money. The city council has been very diligent that it’s not going to raise property taxes to pay for new items, to pay for fancy amenities or other projects.” Knapp says 100-percent of the money will go to help fund projects like improving the municipal park, beach and shelter house, extending recreational trails, and improving a downtown amphitheater, as well as improving the community wellness center and outdoor swimming pool.

He says these efforts are needed to continue to bring in new businesses and new residents. “They want nice walking trails, they want nice golf courses, they want good schools, they want churches, they want the streets fixed up,” Knapp says. “Everybody wants those things done but they do cost money. Hopefully, all of this money will be used for projects that will improve the quality of life for every resident in town.”

Knapp says studies show that improvements to the quality of life will insure community growth.