You are here: Home / News / Book with Iowa connection examines use of ‘fracking’ in oil drilling 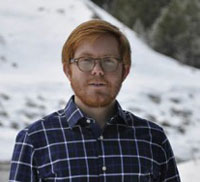 The controversial oil drilling technique known as “fracking” is the subject of a new book called, “Fracture: Essays, Poems, and Stories on Fracking in America.”

The main editor, Taylor Brorby of Ames, calls the book a first-of-its-kind anthology from more than 50 authors representing 26 states, including Iowa, where fracking is being practiced or having an impact.

“My target audience is really people who might have heard about fracking but haven’t really made up their minds one way or the other,” he says. After several public hearings, the Iowa Utilities Board decided last week to delay making a decision on approving the Bakken oil pipeline which is proposed to cut diagonally across Iowa.

The board plans to hold at least three more hearings in Des Moines, one this Friday and two more in March. “What history has shown us is that all pipelines leak,” Brorby says. “I imagine part of the reason the IUB needs more time is because right now, oil costs less than a bucket of chicken from KFC. Financially, it’s irresponsible to even think that this pipeline could be built.”

A native of western North Dakota, Brorby is working on his MFA at Iowa State University. He says the book aims to expose the effects of fracking on local communities as well as its global impacts like flares fueling climate change, oil spills in waterways and earthquakes deep below the Earth’s surface.

Brorby says he hopes the Iowa Utilities Board will “wake up” and realize the proposed oil pipeline across 18 Iowa counties should not be supported.

“This thing will be hauling 25-million gallons a day through Iowa and Bakken oil is extremely corrosive oil,” Brorby says. “Pipelines wear out. It’s simply foolish to think this will be forever intact. We’re going to have to do constant maintenance and be vigilant.”

The book is being published by North Liberty-based Ice Cube Press. A reading of the book is planned for 7 P.M. on February 22nd at the Ames Public Library, with another event scheduled for April 19th at Grinnell College.