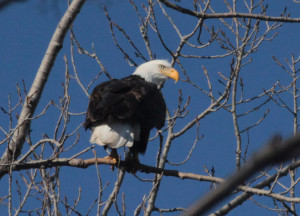 The Iowa Department of Natural Resources is looking for people to participate in its Volunteer Wildlife Monitoring Program.

The DNR’s Stephanie Shepherd oversees the program, which she says gives them more eyes out in the field.

“It gives us folks all over the state who enjoy wildlife and it gives them another opportunity to get out and enjoy wildlife and watch wildlife. But they are also contributing to the conservation of that species by collecting and submitting data on it,” Shepherd says.

Volunteers are most often watching and recording the lives of eagles in the state. Shepherd is holding three weekend workshops in March to train volunteers.

“It’s a three hour training, and we talk about the species biology and nesting ecology, and also take a field trip out to a local eagle nest, and kind of get a feel of what it is like to watch an eagle nest live and in person,” Shepherd explains. She says volunteers have also collected data on osprey and peregrine falcons. She says they usually have around 100 volunteers out collecting data each year on several nests.

Shepherd says it does not take a lot of time to help out. “The minimal requirement is to visit the nests three time during the nesting season — so that would be once in March, once in May and once in June. They are instructed to spend at least 30 minutes at the nest observing and seeing what is going on with the birds,” according to Shepherd. She says a lot of the time is spent traveling to the nest sites, as they try to assign sites that are close to where people live, but the nests are spread out.

Shepherd says most volunteers find themselves putting in more time because they enjoy it. “It’s been my experience that that’s what happens….these are really charismatic species. They do a lot of cool things,” Shepherd says. She says you are provided with a sheet to document what you see, and you never know what that might entail.

“One visit you may go and they are not doing much of anything, so there won’t be a ton of activity. But then other times you’ll get to see the adult birds switch places on the nest while they are incubating or feeding their young. You’ll get to watch the young bird sort of flay their wings and learn to fly,” Shepherd says. “It’s pretty unique experience to get to watch the life cycle of a nest within a year, and most people get hooked on that.”

Shepherd tries to move the training sessions around the state each year. This year the Sac, Clayton and Wayne County Conservation Boards are partnering with the DNR to host the workshops. Trainings will be held on three Saturdays in March: near Elkader on March 5th, near Allerton on March 12th and near Sac City on March 19th. For more information visit: www.iowadnr.com/volunteerwildlifemonitoring. Or you can send an e-mail to: [email protected]