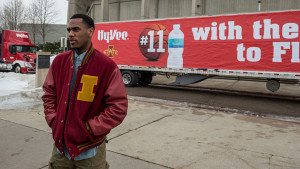 The City of Flint’s drinking water became contaminated with lead after a decision to change its water source from a Detroit line to the Flint River.

Iowa State University basketball player Monte Morris is from Flint and he posted a video to Twitter asking people to donate to the Red Cross as a way to help his hometown.

The 20-year-old point guard says it’s been difficult watching the water crisis unfold in his hometown. “It brought a lot of tears to my eyes because nobody wants their city to be like that. It’s just hard to talk about, honestly,” Morris said. He spoke with reporters this morning outside Hilton Coliseum in Ames, along with Hy-Vee spokesperson Tara Deering-Hansen.

“As a major grocer, we fortunately have the resources to actually step up and do something. It was great that we were able to pull this off in just a few short days,” Deering-Hansen said.

In response, Iowa-based Hy-Vee donated the 11 semis packed with bottled water. Morris wears the number 11 for the Cyclones.