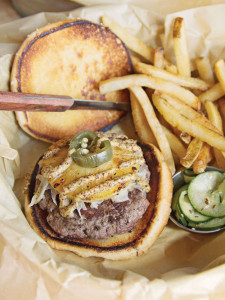 The search is on for Iowa’s Best Burger. Brooke German, marketing director for the Iowa Beef Industry Council, says nominations for the annual contest are being taken now and have to be submitted by March 9th.

“We have three ways they can nominate their favorite burger,” German says. “One is through our website, which is iabeef.org. They can text ‘beef’ to 313131 or they can mail in a nomination form to our office.”

German says the best burger contest has continued to grow since the first competition was held seven years ago.

“Last year, we received just over 4,000 nominations representing 286 restaurants,” she says. “This year, we set the bar high. We would like to double those nominations.” Last year’s winner was in southeast Iowa, Daus Kraut Burger, from The Cider House in Fairfield.

German explains how the contest will work. “We’ll announce the top 10 restaurants on March 15th and from those, we have a secret panel of judges that will go out and taste test each of those burgers,” German says. “The winner for 2016 will be announced on May 2nd.” Complete rules of the contest can be found at www.iabeef.org