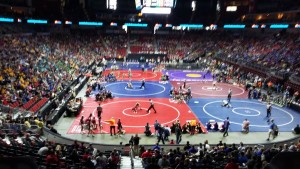 Football rules in Texas and basketball reigns in Indiana. In Iowa, the state is governed by an obsession that takes control this week in Des Moines.

“Wrestling in Iowa is king”, said Alan Beste, Executive Director of the Iowa High School Athletic Association. “In my opinion this is the best state wrestling tournament in the country because we think we do it right in Iowa. We’ve got the best wrestlers, the best coaches, the best officials. This is the top of the heap.”

The crowds for the state high school wrestling tournament dwarf most other championship events and nearly 80,000 fans are expected to jam Wells Fargo Arena. Championship night of the tournament is the only event that offers a reserve seat ticket and Beste says the arena is not big enough to accommodate all the fans who would like to watch the final round.

In an era which feature six classes for the sport of football and four in basketball, wrestling remains a three class sport. Beste says there are no plans to change the number of classes.