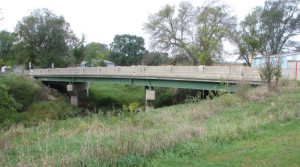 A structurally deficient bridge. The DOT’s Scott Neubauer says bridges like this one have a deck or driving surface that causes the deficiency.

Iowa has more “structurally deficient” bridges than any other state in the country, according to a report released Thursday by the American Road and Transportation Builders Association.

Scott Neubauer, bridge maintenance and inspection engineer with the Iowa Department of Transportation, is quick to point out that a majority of the Iowa bridges in question are on low-volume, rural roads.

Iowa has over 24,000 bridges and the reports claims 5,025 are structurally deficient. Neubauer says that designation, created by the Federal Highway Administration, does not necessarily mean the bridge is unsafe.

“So, it in no way implies that there’s any serious issue going on with the bridge necessarily that needs immediate attention,” Neubauer says. Most of the old bridges in Iowa deemed structurally deficient have weight restrictions posted. Neubauer says county engineers typically choose to focus their limited resources on the structures that carry the heavy trucks and traffic volume.

“Out in rural Iowa, on gravel roads, people need to get to town in their cars and pickups and a lot of these bridges — that’s the only traffic they see and they’re perfectly fine to handle that type of traffic,” Neubauer says.

While Iowa has the highest number of deficient bridges, Rhode Island has the largest percentage of bridges labeled structurally deficient. The report shows 23.2 percent of the bridges in Rhode Island are deficient, Pennsylvania is next at 21 percent, and Iowa is third on the list at 20.7 percent.