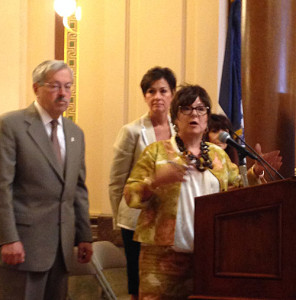 The director of the Iowa Economic Development Authority (IEDA) is downplaying a decision by the leaders of the Dow and DuPont chemical company to keep their corporate headquarters in Delaware, rather than move to Iowa.

Debi Durham says she expected today’s announcement by the company, despite the millions of dollars in incentives the State of Iowa offered Dow/DuPont to locate in the Des Moines suburb of Johnston.

“No, it was not a surprise,” Durham said. “Even though I didn’t know that for sure until last week, when the company flew in and shared that news with the governor, the lieutenant governor, Secretary of Agriculture Bill Northey, and myself…I saw the way the negotiation was going, that was not a surprise to me.”

The company will, however, keep a research and development center in Johnston. The IEDA Board this morning approved roughly $16 million in incentives for the project if the Dow and DuPont merger goes through as expected. “It really came down in the last two weeks, where is this R & D Global Center for Seed and Biotechnology going to go? And that, to me, was the real play,” Durham said. DuPont bought Iowa-based Pioneer Hi-bred International in 1999.

More than 2,600 people currently work at DuPont Pioneer in Johnston. Durham is optimistic that number will grow in years to come. “We believe, not only as things stabilize…this bioscience center, in particular, is the one where you’re going to see the most opportunities well into the future,” Durham said. “We’re really poised well for future growth at this Global Business Center for Seed and Biotechnology.”

Since the Dow-DuPont merger was announced in December, around 175 jobs have been cut at DuPont Pioneer in Johnston. While making the announcement today about not moving the headquarters to Iowa, company officials stated they do not expect more layoffs in Johnston as a result.