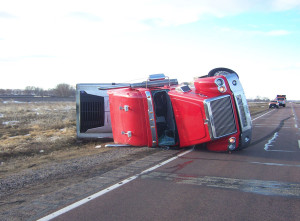 This truck was blown over by heavy winds on Highway 75 south of Merrill.

The entire state’s under a wind advisory today and the strong gusts are causing traffic troubles in northwest Iowa.

A second truck and trailer apparently tried to pull off the roadway on to the shoulder, when the rig had jack-knifed. Authorities are working on both situations. 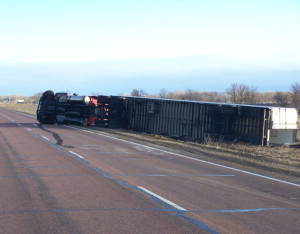 “We’ve had gusts reported all across the upper Midwest that exceeded 40, 45 and even 50 miles-an-hour,” Heitkamp says. “The latest, strongest wind gusts, we’ve had over 70 miles-an-hour in Mitchell.”

The winds are blowing in much warmer weather. Most of Iowa will see high temperatures this afternoon in the 50s and 60s. Shenandoah had 73 on Thursday for the state’s hot spot.