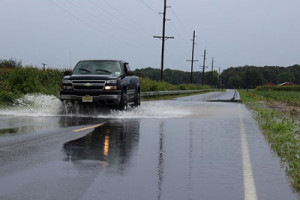 This spell of warm weather may have many Iowans thinking of spring, but the unseasonable conditions have the experts considering the longer-term impact.

National Weather Service hydrologist Jeff Zogg has released the spring flooding outlook for the state. “What we’re seeing right now is an elevated risk of minor flooding across most locations north of Interstate 80 where the snowpack exists,” Zogg says.

“Elsewhere across the state, mainly south of I-80, the risk is pretty much near-normal and the risk statewide of moderate and major flooding is near normal at all locations.”

The flood forecast bodes relatively well for the season ahead but Zogg cautions, a couple of heavy precipitation events, be they rain or snowstorms, could bring a rapid change. “When we’re talking about minor flooding, we’re talking about some localized impacts,” Zogg says. “We could have some road closures. It may impact access to certain locations. Definitely not as bad as moderate or major flooding however minor flooding still has impacts, especially in local areas.”

Multiple factors go into creating the spring flood outlook, but one key element is the amount of snow sitting on the ground, piled in parking lots and heaped in ditches.”Across the northern half of the state, roughly, the snowpack is above normal right now,” Zogg says. “Soil moisture is also high in most locations across the state. In fact, western Iowa, the soil moisture is near record high levels in some locations. Frost depth is another factor we look at and that is very shallow to non-existent. That would tend to decrease the risk of flooding.”

Farmers will be paying close attention to the flooding forecast, especially those with cropland or pastures in low-lying areas along rivers and streams. “Another thing to keep in mind is the soil moisture itself,” Zogg says. “Across the western half of the state it’s above- to much-above normal, even near record high values in some locations, so that may impact some of the activities as far as planting. Even across eastern Iowa, there’s some locations where the soil is still wet.”

Zogg says the atypical warm temperatures over the next few days will melt plenty of snow, elevating the risk of ice jams in many Iowa waterways, which could prompt flash flooding. For more details, visit weather.gov/dmx