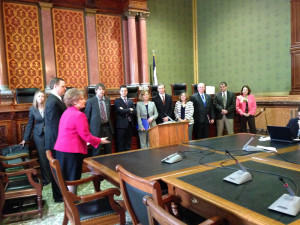 Republican House Speaker Linda Upmeyer of Clear Lake invited a group of Iowans to the statehouse this afternoon to talk about the financial hit they will face if state tax policy isn’t changed.

“It does pull the rug out from under folks,” Upmeyer says. “It is a tax increase that people were not anticipating.”

If the State of Iowa fails to align with federal tax adjustments made in December, Iowa small business owners, teachers and others will have to pay an estimated $95 million more when they file their state income taxes.

Laura Cunningham of Nora Springs said her family invested in an energy-efficient grain dryer in 2015 to replace one that was destroyed in a fire.

The tax break she’s hoping to get deals with depreciation for assets, like that grain bin, that were purchased in 2015. Last year, Kathleen Riessen of Urbandale invested in equipment for the martial-arts businesses she and her husband own and now they face paying $16,000 more in taxes this spring.

“While that may not sound like a ton of money, to us it’s a huge amount,” she said.

Dan Rickels of Anamosa is a farmer who plants row crops and raises cattle. Cattle prices were good a year ago, so he bought a new piece of farm equipment to till his fields.

“Of course then by the time the fall came, the cattle market — the bottom fell out of it,” Rickels said. “In case you don’t know, we’re getting about $700 less s head than we got in the spring for the same animal.”

Roger McEowen, a lawyer from Ames who advises farm clients, said some Iowans will have to take out loans to pay their taxes if the state doesn’t mimic with the way federal tax law treats depreciation of assets.

“We’re very quickly approaching a farm filing deadline of March 1 and that is creating havoc for practitioners in the field as they represent their farm clients,” McEowen said. “…What we would like to see is a delay announced by the Department of Revenue to push the farm filing deadline back to April 30.”

Iowa farmers have to file their taxes by March 1, while the rest of Iowa taxpayers have until April 30 to file their 2015 taxes. There are other federal tax changes that are not currently available at the state level, including a $250 credit for teachers to cover the cost of some of their classroom supplies. Republican Governor Terry Branstad said earlier this year the state couldn’t afford to extend all these tax adjustments, but Republican Speaker Upmeyer says she talked with Branstad today and he’s willing now to go along with these tax cuts.

“This is an important issue we believe because of the timing,” Upmeyer said.

Senator Mike Gronstal of Council Bluffs, the top Democrat in the legislature, said Senate Democrats are willing to pass these tax cuts, if Republicans are willing to adjust tax policy elsewhere. Gronstal suggested doing away with the $40 million tax break the Branstad Administration unilaterally gave manufacturers.