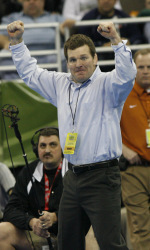 The second-ranked Iowa wrestling team hosts North Carolina State tonight in the inaugural National Duals Championship Series. The Wolfpack may not be thought of as a traditional college wrestling powerhouse, but they’re ranked fourth and have the attention of Iowa coach Tom Brands.

“You look at North Carolina State and they may be off the radar in wrestling”, said Brands, “Believe me, they are on the radar and we have got to be ready to go.”

N-C State has four wrestlers ranked in the top five, including two-time NCAA champion Nick Gwiazdowski at heavyweight. Hawkeye redshirt freshman Sam Stoll dropped a 10-1 decision to Gwiazdowski in December, but has won 10 matches in a row since, including four wins over ranked opponents.

Formerly the NWCA National Duals Tournament, the 2016 National Duals Championship Series matches the top eight Big Ten programs against regular season champions from other conferences. For that reason, #2 Iowa was not matched-up against #1 Penn State.