You are here: Home / Fires/Accidents/Disasters / Aaron Eilerts day of service set for Wednesday 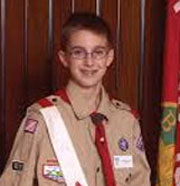 Iowans are being asked to perform a good deed on Wednesday, the statewide “Aaron Eilerts Day of Service and Giving.”

The annual day honors Eilerts, a teenager from Eagle Grove who was killed along with three fellow Boy Scouts when a tornado hit their Harrison County camp in 2008.

Scott Jeske is principal of Robert Blue Middle School in Eagle Grove. “Him being from our school, we got to spend time with him and just see all of the amazing things he did,” Jeske says. “For us, it’s a real honor to continue those traditions.”

Events planned at the school that day include the packaging of 750 meals for needy people in the community, in addition to a ceramic art project that will involve all students and staff. Jeske says they’ll continue to honor this young man’s memory each year. “I said at the time that I’ve never seen anybody like Aaron and I learned a lot about giving from Aaron,” Jeske says. “We’re just hoping to pass a little bit of that on to our kids so they understand that by giving, you get a lot more out of it than you would think.”

Wednesday would have been Eilerts’ 22nd birthday. Each year, the Robert D. and Billie Ray Center presents an award to an Iowan who has displayed the role of service and giving in their communities with the Aaron Eilerts Community Service Award. This year’s award will be presented on July 29 during the annual Iowa Character Awards in Des Moines.