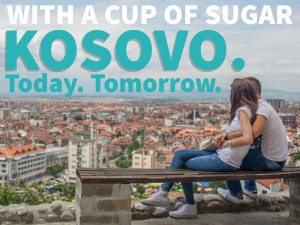 The deadline is early tomorrow for a Kickstarter campaign launched by a northwest Iowa filmmaker to pay for a documentary about Kosovo.

Luke Harwath says his goal is to create a 90-minute film about the fledgling nation, its struggles, its successes and its unusual relationship Iowa, its sister state in America.

The Republic of Kosovo opened a consulate in downtown Des Moines just last month and has close ties to the Iowa National Guard along with a host of developing economic, educational and agricultural exchanges.

Harwarth, a native of Holstein, has made multiple trips to Kosovo for the documentary, interviewing its president, military leaders and scores of citizens.

“It’s about what it’s like to be starting a new country in this millennium, in Europe, the type of struggles that they face,” Harwath says, “and we have this interesting connection in Iowa.” The documentary is to be called, “With A Cup of Sugar. Kosovo. Today. Tomorrow.” Harwath says, “We shot most of it, however, we still have a lot of work to do with the post-production.” That includes a range of things like editing, color grading and adding the music.

The Kickstarter campaign is about half way to its $48,000 goal. “To think about what will happen if we don’t hit that funding, that’s something I don’t even want to think about until we reach that point,” Harwath says. “Right now, I’m just trying to stay as positive as possible and let everybody know how important this is.”

The way Kickstarter campaigns work, if you don’t attain your financial goal by a set time, all donations pledged are lost. The cutoff is around 6:30 A.M. on Wednesday.