You are here: Home / Sports / Russell out at Upper Iowa 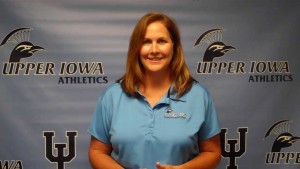 Upper Iowa University has fired its women’s basketball coach. Peacocks athletic director David Miller has confirmed that Head Coach Carol Russell has been relieved of her duties for the remainder of the current season and that her contract will not be renewed.

The Peacocks ended their regular-season with nine-straight losses and a 5-23 record. During Russell’s six-year tenure in Fayette, Upper Iowa never won more than seven games in a single season. The Peacocks’ combined record during that span was 28-136.

She took over the Upper Iowa program in 2010, following a successful eight-year run at Nebraska-Kearney.

In announcing Russell’s dismissal, Miller confirmed that Assistant Coach Mike Sybrant has been named the Peacocks’ interim coach. Upper Iowa is the seventh seed out of the South Division in the Northern Sun Conference Tournament, which starts tonight. The Peacocks play at second seeded Minnesota State-Moorhead out of the North Division.