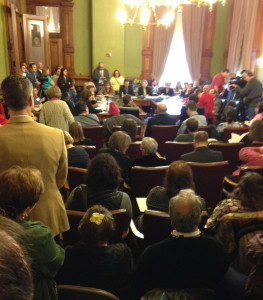 Several people turned out to voice their opinion on the Medicaid privatization.

An overflow crowd of concerned Iowans pleaded with legislators to establish a new state panel to police the three private companies that will begin managing care for Iowa Medicaid patients April 1.

“Look at all these people,” Linda Levy of Cedar Rapids said during a statehouse hearing on Wednesday afternoon. “They need help.”

Levy told legislators a “strong oversight committee” would help make the program work for everybody. Anna Whittle has a sister, a niece and a granddaughter who receive health care coverage through Iowa’s Medicaid program.

“To overwhelm an existing oversight committee with 560,000 new assigned members is just not right,” Whipple said.

Reyma McCoy McDeid, the executive director of the Central Iowa Center for Independent Living, urged legislators to ensure the parents, guardians and advocates for Iowans with disabilities are members of any oversight panel.

“My question is: How are we going to do this the Iowa way?” McCoy McDeid asked.

Daniel Britt, an administrator at Northern Iowa Therapy, a Waverly-based firm that serves Medicaid patients, urged legislators to give an oversight panel “some teeth.”

“I get that we have to balance a budget. I get it. There’s a lot of things that need to be covered. There’s a limited amount of money, but as providers, we need answers,” Britt said. “We need clear answers.”

Carla Dempsey of Mason City spoke on behalf of two friends trying to figure out if the private companies will continue to have Medicaid cover the expensive medications their kids take to control their seizures.

“I wanted to speak from the heart because this just brings tears to my eyes,” Dempsey said. “I can’t help but feel for these other people and I’m proud to be an Iowan and right now, I’m telling you, I’m not so proud.”

Jeff Edberg of Iowa City has been trying to find out whether his adult son who is profoundly disabled will be able to continue to live at a care facility in Dubuque.

“They said: ‘On April 1st we can give you the answers. We can’t give you the answers before that. We don’t have any staff.’ And I said: ‘What happens to my son on April 2?’ And they didn’t have an answer for that so we need oversight. We need some redress for this. This is not statistics…This is people,” Edward said, his voice cracking with emotion. “And they’re important people and they need better than what we’re offering them.”

A bill pending in the Democratically-led Iowa Senate would set up a new state “working group” to oversee the three companies hired to begin managing care for Iowa Medicaid patients. The top Republican in the legislature has said existing oversight is sufficient.