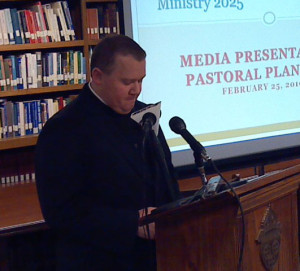 Officials with the Catholic Diocese of Sioux City have unveiled a restructuring plan that would greatly reduce the number of parishes across its 24-county region in northwest Iowa.

“Really this is the first edition of a draft. We know that this is going to morph and change as we receive feedback not only from our priests, but from the faithful that belong to the Diocese of Sioux City,” said Father Brent Lingle, the director of pastoral planning for the diocese.

There are currently 108 parishes in the Sioux City Diocese and, under the draft proposal, 41 parishes would be closed or merged by 2025. The 67 parishes that remain would be grouped into 31 “clusters” and Lingle said the dwindling number of available priests is one reason these changes are necessary.

“By the year 2025, we are going to have available to us 31 priests to serve as pastors,” Lingle said. “That’s a dramatic change from where we are right now with 58 active priests.”

In addition, attendance at mass in the parishes in Sioux City’s Diocese has dropped by 27 percent since 2008.

“Under the proposal, 40 of our parishes will move to ‘oratory’ status,” Lingle said. “That simply means the parish itself is closed and will and can be used as a liturgical site, but would not have Sunday mass.”

Father Lingle said even with the closures, no Catholic in the northwest Iowa diocese would have to drive more than 20 minutes to get to a church.

“We’ve done the analysis,” Lingle said. “Our consultants have worked on that and so we understand as a more mobile society, it’s easier for us to get to places.”

Nine of the 31 new “clusters” of parishes would focus on Hispanic association ministry.

Many priests in the diocese have been working 80 hours a week. Under this new arrangement, the average work week for a priest would be 55 hours and no priest would conduct more than three masses in a weekend. Meetings will be held throughout the Sioux City Diocese this spring and summer to discuss the proposed closures. The changes would begin in the summer of 2017.