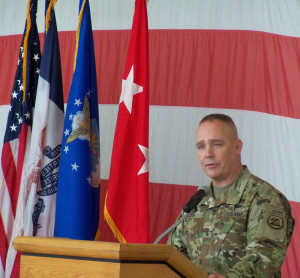 The Iowa Air National Guard celebrated the 75th anniversary of the 132nd Wing based in Des Moines in a ceremony Friday.

The 132nd began on February 25th in 1941, starting with training planes, and them moving on to the several others. The commander of the Iowa Guard, adjutant general, Tim Orr, spoke about the wing’s past.

Orr also joked about the early history of the Air Force. “Here I am today at an Air Force ceremony as an Army officer, only to say that we created the Air Force — the Army from the Army Air Corps — so we’re still looking for ways to take it back. I don’t think that’s gonna happen though,” Orr said to laughter. The 132nd no longer has manned aircraft, as the F-16 were taken away and the unit now flys unmanned drones from the base. It also conducts intelligence and support missions.

Orr says the 132nd is a big part of the overall mission. “As we sit here today, we have men and women who are serving all over the globe. From not only the 132nd, but from the 185th, we have about 150 deployed supporting the fight against ISIS, to the current Army Guard members. But it’s a whole team approach, and I will tell you that the Army and the Air Guard are as tight as we have been in our history,” according to Orr. 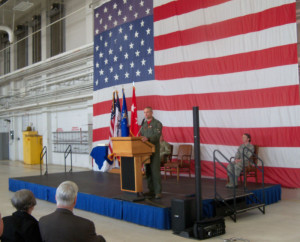 Colonel Shawn Ford, the commander of the 132nd Wing, says the creation of the base was a collaboration between the military and local officials. “The 132nd began 75 years ago through the vision of 12 individuals from the Iowa National Guard and the local community as a means to improve the city of Des Moines,” Ford says. He also credited the men and women who have served in the 132nd through the years.

“From each wing commander to the youngest airmen, every 132nd member has been instrumental in the success we celebrate. We have gone from five aircraft in 1941 to our current three enduring missions that will support the air force long into the future,” Ford says. While the unmanned drones flown by the Wing now are not as visible as the F-16’s that once roared across the runway, Ford says they also have an important mission.

“As I speak right now I have airmen on this base flying M-Q-9 missions in support of our nation’s needs. They are ready to put decisive, precise affects on terrorists who intent to harm our way of life,” Ford says. Ford says the 132nd has come a long way from the early days, but continues with much the same mission. 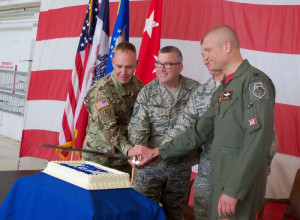 “Today we are an organization with over 900 jobs that contributes to our nation’s defense — and yet at a moment’s notice can answer our governor’s call to provide domestic support when necessary,” Ford says.

He says the 132nd will continue to meet the challenges ahead. “There have been many changes in the past and there will be many changes in the future…any organization that does not adapt to the current environment is bound to fail We are looking forward to the future of this base,” Ford says.

One of the changes is the addition of Army helicopters to the 132nd in the hanger where the F-16’s used to reside.

The ceremony wrapped up with General Orr and the oldest and youngest member of the 132nd cutting a special cake with a military saber.