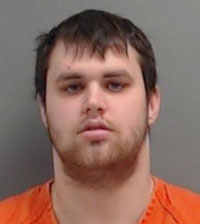 A western Iowa man who badly injured a baby is going to prison.

He initially faced more serious charges, but agreed to a plea deal. The child was five-months-old at the time and the son of Weatherwax’s girlfriend.

When she took the baby to the doctor, after Weatherwax had punched the child in the face, it was discovered the infant had 23 broken bones – likely inflicted over three months.