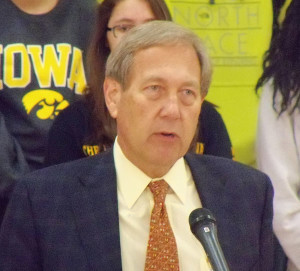 University of Iowa president Bruce Harreld says a situation this past summer involving the school’s interim Public Safety Director Dave Visin is closed as far as the school is concerned.

The Cedar Rapids Gazette reported that Visin became involved in a situation with the Johnson County Sheriff’s Office investigation of Visin’s stepson and a hit and run accident last June.

Harreld says his review found no reason to pursue the issue. “We’ve talked to the county..they say to us there’s no basis for any criminal action or legal action whatsoever. We’ve looked at it relative to our own policies…its seems there’s no there, there. If something surfaces, then of course we will take a deeper look. Right now we’ve done all the work and there is nothing there,” Harreld says.

The Gazette also reported that the Board of Regents spokesperson says the Regents did not find out about the issue until the story came out in the paper. Harreld says that’s because there was nothing found to pursue.

“I spoke to the Regents last night, told them as soon as I knew about. I think the issue probably popped up last summer, because I know people on my staff were aware of it. But I think, we didn’t see any need to go further until this story pops up. As I said, we talked to the county, the county doesn’t think there’s any reason for criminal charges. We don’t see any violation of university policies,” Harreld says. “Anybody can publish any story they want. We don’t see any reason to do anything other than what we are already doing.”

Harreld made his comments to Radio Iowa at an event in Des Moines.