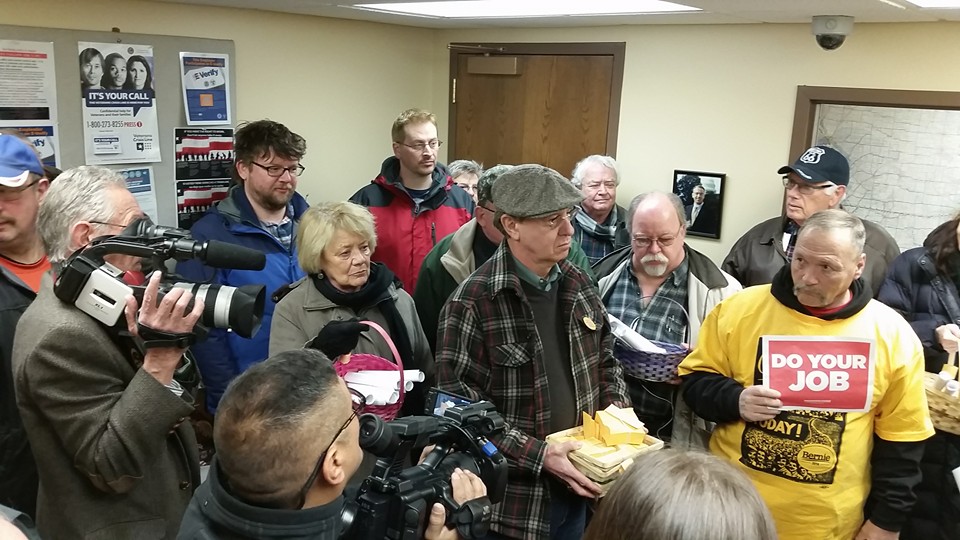 Matt Sinovic, a spokesman for the group, says they want to send a message to Grassley about President Obama’s nominee for the opening on the U.S. Supreme Court.

“We’re not even asking for him to definitely support whoever the nominee is because we don’t know who the nominee is yet,” Sinovic says. “That’s unrealistic, but at least hold a hearing.”

Grassley is chairman of the Senate Judiciary Committee and he does not plan to hold a committee hearing on the nominee, regardless of who Obama may pick.

Grassley says Obama would likely tilt the court to the left, so the NEXT president should fill the vacancy. A new CNN poll finds 58 percent of Americans want President Obama to fill the Supreme Court vacancy. An even larger percentage — 66 percent — say Grassley’s committee should at least hold a hearing for the nominee. Sinovic says Grassley is failing to fulfill his constitutional duty as a senator.

“Most people wake up every day, we go to work,” Sinovic says. “If we have a job description, we do that job.”

Sinovic and about a dozen other activists were at Grassley’s Des Moines office yesterday afternoon, while others delivered petitions at Grassley’s offices in Cedar Rapids, Council Bluffs, Davenport, Sioux City and Waterloo.

Democratic Senators criticized Grassley on Thursday for postphoning a Judiciary Committee meeting where they planned to ask Grassley questions about the Supreme Court vacancy. The Senate’s Democratic leader is even accusing Grassley of lying about why the meeting was delayed.

Grassley is seeking a seventh term in the U.S. Senate this year and former Lieutenant Governor Patty Judge is rumored to be ready to announce she’ll compete for the seat, too. Judge would face at least one opponent in a Democratic Primary first. State Senator Rob Hogg has already filed the paperwork to run and three other Democrats have indicated they may do so as well.