You are here: Home / News / UNI goes dancing at the buzzer 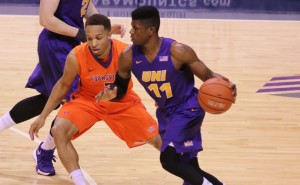 The Northern Iowa Panthers are going dancing for the eighth time in school history. Wes Wasphun’s jumper from the top of the key bounced high off the back of the rim and dropped through at the buzzer as the Panthers beat Evansville 56-54 in the championship game of the Missouri Valley Conference Tournament.

“I was hopeful it would be under 30 seconds when we got it back so that we would have the last shot of the game”, said UNI coach Ben Jacobson. “If that was going to be the case we were not going to call time out.”

Washpun scored 18 points for the Panthers, who led by as many as 17 points before the Aces roared back with a 30-12 run to take a brief lead.

It is the second straight Valley tournament title for a Panther team that started conference play 2-6. It was also their third win over Evansville this season and the games were decided by a total of seven points.

“Evansville is a great team and they have a couple of great players”, said Washpun. “They play extremely hard on both ends. You can’t ask for anything more out of an opponent and we battled it out this year throughout all three games.”

The Panthers take a 22-12 record into the NCAA Tournament.