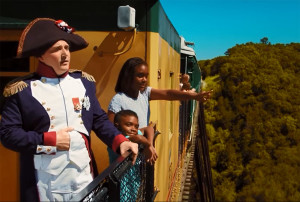 Napoleon riding the Boone and Scenic Valley Railroad in a tourism commercial.

Residents in four states that neighbor Iowa will start seeing television commercials today that tout some of the great places in Iowa to visit.

Jessica O’Riley, with the Iowa Tourism Office, says many people are starting to plan their summer vacations and they ought to consider Iowa as a destination.

“The story is, of course, he sold the land that became Iowa in the Louisiana Purchase and the premise is that he comes back, discovers everything that’s incredibly awesome about Iowa and is so regretful that he sold the land in the first place,” O’Riley says. “You saw him last year explore some places. He explores additional places this year, like the Iowa Speedway, and has a grand old time.”

O’Riley says tourism is a vital industry for Iowa. “For 2014, tourism in Iowa generated more than $8-billion in expenditures,” she says. “We saw an increase in traffic on our website of almost 30% last year, so we take that as a good sign that people are investigating Iowa as a travel destination and we hope when we get those numbers for 2015 that we will see an increase.”

The commercials are being aired in Chicago, Minneapolis, Kansas City and Omaha. You can see them at www.traveliowa.com.