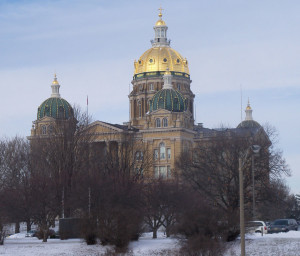 A bill that’s passed the Iowa Senate and is now eligible for House debate would make it easier to convict so-called “peeping toms.” Ruth Lapointe was a University of Iowa student in 2012 when a neighbor caught their landlord in the act.

“She had stuffed one of the peep holes in her ceiling with cotton balls and noticed the cotton balls being removed and then was able to confront our landlord right after the incident and he admitted guilt,” Lapointe says.

Lapointe found a peep hole in her apartment, above the sink in her bathroom. Her landlord was convicted of 11 counts of invasion of privacy, but was not charged for spying on the apartments where men lived, just women like Lapointe. Lapointe says current law is flawed because it requires a peeping tom’s victim to be nude or partially nude and requires prosecutors to prove the peeper was sexually excited by what he or she saw.

“The crucial elements of this bill are that it removes requirements of arousal for a perpetrator of invasions of privacy or peeping tom,” Lapointe says. “That’s very hard to prove in court, that kind of intent, and not only is it hard to prove in court but, in my opinion, it is completely irrelevant to the crime.”

The bill has passed the Senate unanimously and last Thursday the House Public Safety Committee gave the bill its unanimous support. A similar bill was filed last year after a Des Moines cop was spotting looking through a locker room window as a female officer changed clothes inside, but he wasn’t prosecuted because the woman who caught him couldn’t say what he was looking at. Lapointe says invading someone’s privacy “without a legitimate purpose” should be sufficient for a conviction.

“The bill, in my opinion, does a great job of just making it so if you assume privacy, you believe yourself to be in a private space, someone who is invading that is guilty,” Lapointe says.

Last week, Coralville police arrested a Tiffin man who is accused of using his cell phone to take a picture of another man who was inside one of the stalls in a shopping mall restroom. The bill that awaits House debate would make it illegal to install or retrieve equipment used to take pictures or record video in places someone reasonably expects to be a private place.