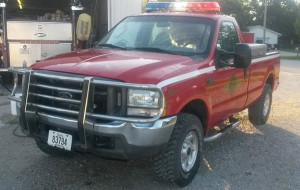 A fire department vehicle that was reported stolen last week from a small town in southwest Iowa was recovered yesterday in eastern Iowa.

Cedar Rapids Public Safety spokesperson Greg Buelow says a tip from the public led police to the Lorimor fire truck parked on the city’s west side.

“Police officers went to the scene and found the vehicle there. It had not been damaged and the keys were actually in the vehicle,” Buelow said. “Their investigation revealed the vehicle may have been sitting there for almost a week.”

The fire department vehicle, a 2004 Ford F-350 truck, was returned to the Lorimor Fire Department this morning. Buelow is hoping someone will overhear something, report it, and there will be an arrest in the case.

“Somebody’s going to be out there bragging about it, talking about how they ‘pulled a good stunt’ or whatever reason why they did it,” Buelow said. If it was just a prank, Buelow doesn’t believe there’s anything funny about it. “First of all, you took an emergency vehicle out of service, besides the fact they also committed theft,” Buelow said. “That left a town or township without a piece of fire apparatus for a week. It’s not something people should be proud of.”

The truck and its equipment were valued at $15,000. Beulow said everything on the truck appeared to be intact.