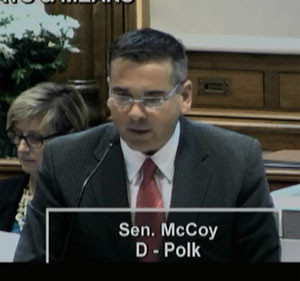 All the Democrats and one Republican in the Iowa Senate have voted to expand Iowa’s hate-crimes law so there could be enhanced penalties for those convicted of committing a crime like assault against a “transgender” person. Senator Matt McCoy, a Democrat from Des Moines who is gay, says Iowa is a tough place to be transgender.

“This is a group of people that have been marginalized in so many ways,” McCoy says. “…Their characteristics are easily identifiable and oftentimes they are assaulted because of those characteristics.”

Republican Senator Charles Schneider of West Des Moines joined the 26 Democrats in the Iowa Senate to pass the bill. A 2007 Iowa law forbids discrimination on the basis of gender identity in employment, housing, education and credit.

During today’s debate, Senator Jake Chapman, a Republican from Adel, described the abortion process in great detail and tried unsuccessfully to add “unborn status” as a protected class in Iowa’s hate crimes law.

Chapman’s attempt to add the unborn to the bill was ruled out of order.

On Monday during remarks in the senate, Senator McCoy mentioned last week’s shooting death of a teenager in Burlington, saying the teen had been bullied in school because he was questioning his gender identity. A spokesman for Burlington police says McCoy’s description of the shooting was “completely inaccurate.” McCoy says he got the information from a “reliable source.”