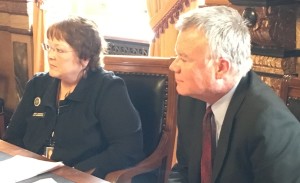 Two Democrats in the Iowa House are proposing a new way to raise money for water quality efforts in the state — and about half of the money would come from farmers.

“Water quality problems in Iowa require all hands on deck,” says Representative Marti Anderson, a Democrat from Des Moines. “…The bottom line is that it’s time to get serious and double down or triple down on our committment to fix our impaired waterways.”

Anderson and Democratic Representative Chuck Isenhart of Dubuque both propose using state tax dollars, but they envision having farmers contribute as well. Commodity groups would pass “check-off” referendums, similar to the “check-off” payments participating farmers make today based on the amount of grain or number of livestock they sell.

“Our preliminary research has shown that if producer groups were to improve water quality check-offs at even half the level of existing check-offs, then we could raise up to $80 million a year,” Isenhart says. “Eighty million dollars a year could flow into the Clean Water Fund once the private money is matched by state taxpayers.”

Isenhart says their plan also calls for creation of a state “Clean Water Commission” to decide how and where to spend the money. It would structured like the Iowa Transportation Commission, which decides how state gas tax money is spent on roads and bridges.

This water quality funding idea is an alternative to Republican Governor Terry Branstad’s plan to extend a sales tax used for school infrastructure for another 20 years and use the inflationary growth in that tax for water quality initiatives. U.S. Ag Secretary Tom Vilsack, the state’s former governor, was on hand when Branstad announced his plan in January. Vilsack issued a written statement Tuesday, saying legislators now have “two viable options to address water quality in Iowa.”