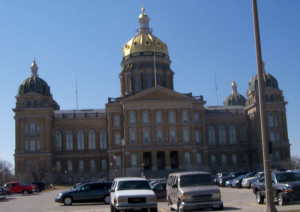 There’s been a breakthrough at the statehouse that resolves a dispute over tax policy and it appears the stand-off over school funding will be over soon.

“Iowans gave us divided government in the state of Iowa,” Gronstal says. “We worked together with the House to come up with a plan that we believe will be good for 70,000 Iowa taxpayers.”

Legislators have agreed to a one-year extension of a tax break, so small business owners and farmers will save about $95 million less in state income taxes. House Speaker Linda Upmeyer, a Republican from Clear Lake, has been publicly advocating for that tax break for weeks.

“We’re very excited that we’ve got an agreement that puts the issues that we care very much about forward,” Upmeyer says.

The other part of the deal will scale back a tax break to manufacturers. Governor Branstad’s administration acted on its own last year to erase state sales taxes on consumable supplies, like drill bits and hydraulic fluid, that are used in the manufacturing process. Legislators have agreed to reduce  that by about a third. The other part of this deal is not yet done according to leaders like Upmeyer — but it appears legislators will vote within the next 10 days to set the level of general state aid for schools, for the budgeting year that starts July 1.

“There’s been a lot of ongoing discussions about the topic,” Upmeyer says, “but I’m hoping we’ll have final agreement next week on how that’s going to look and what we’re going to be able to devote to education.”

“It certainly is a significant step in the right direction,” Branstad told reporters this morning. “…I always reserve judgment until I see it in its final form, but it appears from what I’ve heard to be something that resolves some big differences of opinion between the two houses and hopefully will make it possible to move forward with our other priorities.”

“We chose not have to gridlock and, instead, to pursue progress,” Gronstal says.

Legislators from both parties say settling on a spending level for K-12 public schools means they’ll have to reduce their spending plans elsewhere in the state budget.