The Iowa Utilities Board voted 3-0 to approve a construction permit for the Bakken pipeline.

The Iowa Utilities Board voted unanimously 3-0 today to approve a construction permit for Dakota Access to build the Bakken oil pipeline across 18 Iowa counties.

The board returned to open session at 1 p.m., after a couple of days of closed-door deliberations, and board member Libby Jacobs of West Des Moines read a statement about the decision.

“We weighed the public benefits of the proposed hazardous liquid pipeline project against the public and private costs and other determents as establish by the evidence on the record. And then together we weighed all of the issues presented by the parties and found the issues of safety, economic benefits, environmental factors and landowner’s rights to merit the most significant weight in reaching our decision,” Jacobs says.

Board member Nick Wagoner of Marion then read the order recommending approval. “That the proposed pipeline will promote the public convenience and necessity, pursuant to Iowa Code 479B.9. A permit should be granted and issued to Dakota Access only after the company has complied with the requirements set forth in this order,” Wagoner says.

Board chair Geri Huser then called for a vote and all three members voted for the permit.

Shortly after the vote, several of the people in the audience started shouting and the board quickly adjourned. “This issue is not over, the rights of Iowans have not been protected and we are not stopping the fight,” one woman says. “I’m an Iowan and I vote no. This is not over,” another woman followed.

The members of  the Bakken Pipeline Resistance Coalition then moved outside the IUB building to talk with the media.

Wally Taylor is a lawyer who works with the group. “The board has to find that this pipeline promotes the public convenience and necessity. As they said in there — they admitted — that that means the benefits would outweigh the costs and the risks, it certainly does not,” Taylor says. “And the next step is to appeal this decision to district court.”

Taylor believes they have a chance to get the decision overturned in court. “We plan to argue to the court that the board overstepped its power, it was arbitrary and capricious in granting this permit,” Taylor says. He says the Corps of Engineers has still not authorized the crossing of the water bodies the pipeline must cross.

Pam Alexander is a land owner who was emotional after the decision. “We live in Wapello, our land is in Mahaska County, it’s been in our family for at least four generations, and I am really disappointed that they didn’t stand up for the landowners rights in this state,” Alexander says.

Alexander believes more harm than good will come from the pipeline. “I think it is going to be detrimental to this whole state — our land, our water if this thing leaks — I have no confidence in Dakota Access in being able to build this and take care of this pipeline,” according to Alexander. “And these easements they want for the rest of our lives — and our childrens’ lives — and it just isn’t right.” The crowd around Alexander shouted “That ain’t right.”

Carolyn Raffensperger with the Science and Environmental Network says her group supported the No Bakken group on behalf of future Iowans. “We believe that the benefits of this pipeline are very short term and no one was looking out for the longer term interest of the great grandchildren who will live here in Iowa,” Raffensperger says. “Iowa is defined by our rivers, our state constitution starts our by naming those precious rivers. And now we will be crossing them with this hazardous liquid pipeline — that is what it is called.” 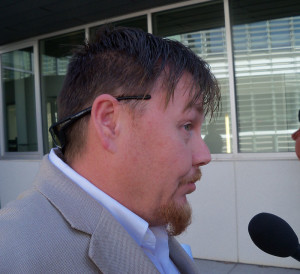 The vice president and business agent of the Union of Operating Engineers Local 234 in Des Moines stood quietly by as those opposed to the pipeline talked. Chad Carter says they can think what they want about the construction of the pipeline, but says the construction workers will do a good job.

“I’m very, very pleased with the board’s decision. I think they made the right choice Iowans, for the taxpayers of Iowa,” Carter says.

Carter says the project will create between 300 and 400 jobs, and many of the workers will be Iowans. “Under this agreement that we have with the national pipeline association, we will employ a little over 50 percent of our members from Iowa. The contractor can bring in their 49 percent, but they still might have our company members working on this project,” Carter says. The order approved by the Iowa Utilities Board sets out several terms Dakota Access must meet. They include a general liability insurance policy in the amount of at least 25 million dollars; Dakota Access must demonstrate and file the unconditional and irrevocable guarantees from its parent companies for remeditation of damages from a leak or spill.

Governor Terry Branstad and Lt. Gov. Kim Reynolds issued the following statement in response to the Iowa Utilities Board decision on the Bakken Pipeline project:

“Gov. Branstad and Lt. Gov. Reynolds appreciate the thorough, thoughtful and transparent process conducted by the Iowa Utilities Board in reaching a decision.  The Iowa Utilities Board allowed many different stakeholders to voice their opinions on the Bakken pipeline and the governor and lt. governor respect the decision made.”