You are here: Home / Sports / Eekhoff hopes to ride off with record 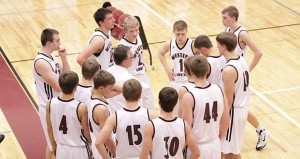 Western Christian coach Jim Eekhoff will bid for an eighth state title in the 2A championship against Cascade.

Western Christian coach Jim Eekhoff will be in search of a record eighth state championship, tonight, when the Wolfpack play Cascade in the class 2A championship game.

It will be his final game as coach after Eekhoff informed his team he is retiring at the end of the current season. He has been at Western Christian for 38 years.

“I’m going to miss the players but I will have friendships with them for a lifetime”, said Eekhoff. ” I am going to miss the assistant coaches and the coaching fraternity. There comes a point where you have to make a decision on whether you are going to keep doing this or not.”

“I am just glad I have gotten to spend four years with him”, said Van Lingen. “It is going to be sad knowing this is the last game for both of us here.”

Eekhoff’s seven state titles has him tied with the late Paul Moon, who directed Davenport High School to seven state championships in boys basketball for most in the state’s history.