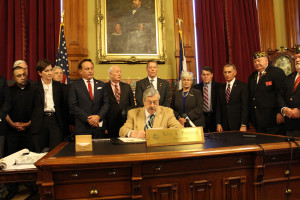 Iowans who live in another country as well as Iowa soldiers on duty overseas will have an extra month to ask for, receive and return an absentee ballot for this fall’s election. Governor Branstad signed that policy into law Thursday.

“This is a great bill that allows those residing overseas and those who serve our country the freedom to participate in our elections,” Branstad says, “gives them the flexibility of having that extra 30 days.”

In previous elections, Iowans serving or visiting overseas had 90 days to request a special absentee ballot and return it. The new policy goes into effect July 1 and extends that time period to 120 days. 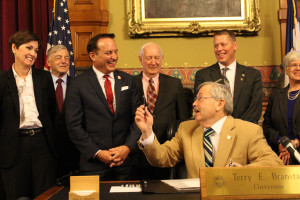 Governor Branstad offers a pen used to sign the bill to Secretary of State Paul Pate.

Secretary of State Paul Pate is the commissioner of Iowa elections. He says at any time, the 9000 Iowans who are Iowa National Guard soldiers could find themselves on active duty in remote places overseas.

“They’re not all stationed at a base where they just walk in and access that voting resource,” Pate says. “This gives them that extra time to do that.”

The new law also gets rid of a technicality that forced county auditors to toss out some ballots cast from overses and military voters if another piece of paperwork hadn’t been completed.

Several legislators, county auditors and veterans crowded around the governor’s desk at the statehouse as he signed the bill into law.