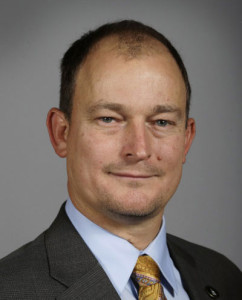 The only Republican in the race to challenge Iowa’s lone Democratic Congressman is dropping out.

State Senator Mark Chelgren of Ottumwa enter the race for Iowa’s second congressional district in October. Dave Loebsack of Mount Vernon has held the seat since 2007.

Chelgren says, while he believes he could beat Loebsack, he’d rather stay in Ottumwa with his family. “While my kids are still young, I have a responsibility to spend my time with them,” Chelgren said. “I can always run in the future because I’m only 48 years old.”

Chelgren acknowledged he had also not raised as much money for the campaign as he had hoped, but said that he had collected enough signatures to appear on the ballot. Trudy Caviness, a member of the GOP State Central Committee, says if another Republican wanted to run, they would only have one week (until March 18) to collect the required signatures.

Caviness says that isn’t likely to happen, but there’s an alternative for the party to nominate a candidate. “The second procedure is that we would reconvene after the primary…reconvene the district convention and we would nominate a candidate,” Caviness said. The second congressional district covers much of southeast Iowa, including Davenport, Iowa City, Clinton, and Ottumwa.