A scoring mistake turned into a superb display of sportsmanship this week in Iowa. At last month’s girls state bowling tournament in Des Moines, Charles City took home the third place trophy in class 1A.

But, team members later discovered a 10 pin error in their scoring. Jason Eslinger, with the Iowa Girl’s High School Athletic Union, is praising the Charles City girls for reporting the mistake, which resulted in the third place trophy going to Le Mars. 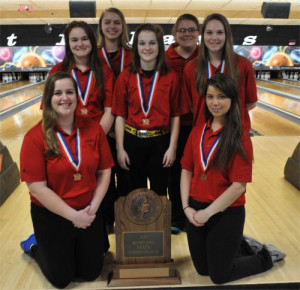 “The (Charles City) team wanted the right team to have the trophy and not only that, but they wanted to deliver the trophy to Le Mars in person. It was just a tremendous amount of sportsmanship on their part,” Eslinger said.

The two bowling teams met on Tuesday in Humboldt to make the trophy exchange. That’s where the Le Mars girls turned the “feel good” story up a notch further.

The two teams had lunch together in Humboldt and the Girls Athletic Union picked up the bill.