You are here: Home / Sports / Drake to play in second straight WNIT 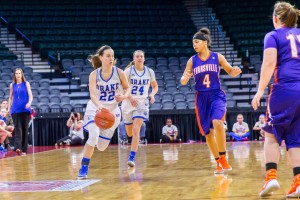 Drake (22-9) will host Sacred Heart (20-12) on Thursday, March 17 at the Knapp Center in the first round of the 64-team postseason tournament. Game time versus the Pioneers will be announced Tuesday. This is the first-ever meeting between the two schools.

Drake has previously appeared in the WNIT 11 times, including making a run to the WNIT final four in 1999. The Bulldogs own a 13-12 all-time record in 25 WNIT games.

Drake and UNI are the two Missouri Valley Conference teams to make the challenging tournament field, which includes 36 teams with 20 or more victories.