You are here: Home / Sports / Northern Iowa to travel to Nebraska to open WNIT 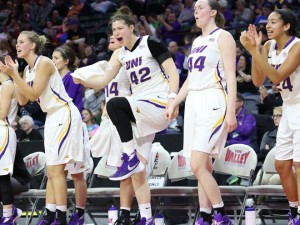 The University of Northern Iowa women’s basketball team received an automatic bid to the Women’s National Invitation Tournament after winning the regular season MVC title, taking on Nebraska in Lincoln, Neb. on Thursday, March 17. A game time will be set on Tuesday.

This is UNI’s sixth post-season appearance in the last seven seasons, including back-to-back invitations to the WNIT. UNI has earned eight selections to post-season tournaments in program history, with six of those coming under the direction of three-time MVC Coach of the Year, Tanya Warren.

UNI has faced off against the Nebraska Cornhuskers six times in school history, with its last match up taking place in 2010 in the NCAA Tournament. UNI has accepted bids to play in the WNIT in five previous seasons, including 2001, 2003, 2006, 2013 and 2015.

UNI is coming off of its seventh straight winning season with 17 or more victories. The Panthers are currently 22-10 overall, its most wins in a season since the 2010-11 season when UNI finished 27-6.
The Panthers claimed the Missouri Valley Conference regular season title in 2015-16, wrapping up conference season on an eight-game winning streak. UNI turned it into a 10-game winning streak, advancing to the finals of the MVC Tournament to take second place.

Along with two team trophies and a coach of the year award, the Panthers also brought home some hardware on the individual side of things. Madison Weekly and Amber Sorenson were both named to the All-Conference first-team while Jen Keitel earned honorable mention and Sharnae Lamar was selected to the All-Defense team. Weekly and Lamar also both landed on the All-Tournament team after their spectacular performances over a span of three games in Moline, Ill.