You are here: Home / News / Search on for state’s best pizza 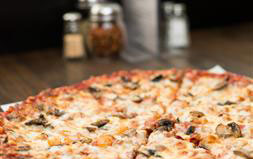 Pagliai’s pizza is one of the pies in the contest to find Iowa’s best pizza.

A contest is underway to determine the location of Iowa’s best pizza. Eight restaurants around the state were selected for the “March Madness” style showdown.

They are: Zipp’s Pizzaria in Adair, Great Plains Sauce and Dough Company in Ames, Santa Maria Winery in Carroll, Mabe’s Pizza in Decorah, Fong’s Pizza in Des Moines, A & A Pagliai’s Pizza in Iowa City, P’s Pizza House in Le Mars, and Zeno’s Pizza in Marshalltown.

The Iowa Tourism Office is coordinating the tournament and spokesperson Jessica O’Riley explains how the eight restaurants were selected. “We asked on Facebook for favorite locations. We also did some Trip Advisor research and others were called out by Midwest Living or other publications as superb pizza,” O’Riley said. Iowans can vote for their favorite pizza on Travel Iowa’s Facebook page.

The eight restaurants face off in four head-to-head battles with a champion crowned on Friday, March 25. The winning restaurant will boast the title of “Iowa’s Best Pizza” place, but the businesses’ customers will win something as well.

“The winning restaurant will offer a $3 off coupon for people to go to the restaurant and experience the pizza themselves,” O’Riley said. Last year, the Iowa Tourism Office organized a similar contest to determine the location of Iowa’s best pie.

The winner was a cherry pie served by Crouse Cafe in Indianola.