You are here: Home / Fires/Accidents/Disasters / Storms do damage in eastern Iowa, some injuries reported 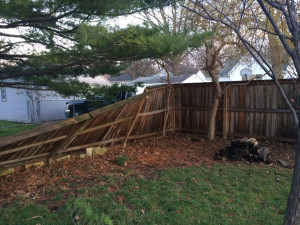 At least five people were hurt in last night’s severe weather in eastern Iowa and more than three-dozen residents were evacuated from their homes.

Tim Gross, a meteorologist with the National Weather Service in Davenport, says the storm system that brought strong winds, heavy rain and hail arrived in southeast Iowa around 6 P.M. and moved northward.

“We had several tornado reports near the Quad Cities, close to Le Claire and then another tornado report near Clinton,” Gross says. “Today, we’ll have storm survey teams going out to assess that damage and strength and the track of those systems.” Spotters say a funnel cloud hovered over Keokuk but didn’t touch down.

Two storm survey teams are being dispatched by the weather service, one each to Scott and Clinton counties, where twisters were reported. “They will look at radar data and determine where the start of the tornado occurred, talk to first-hand accounts of the storms,” Gross says. “They’ll find out where it ended at each site and figure out what the highest wind speed is of the tornado which we’ll then use to rate the tornado on the E-F scale.” 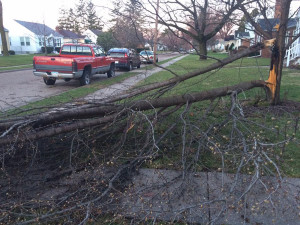 Trees knocked down by heavy winds in Bettendorf.

There were numerous power outages and some residents are still in the dark. Wind gusts in the Quad Cities topped off at 69 miles an hour. Tennis ball-sized hail was reported in northeast Missouri, though the ice chunks weren’t quite as big in Iowa.

Radio station KROS reports at least 5 people were hurt by the storms in Clinton with damage to multiple trailers at the Royal Pines Village mobile home park. Around 40 residents from the park were evacuated to the Clinton airport due for shelter due to a gas leak.

A High Wind Warning remains posted today for a large section of northern, central and eastern Iowa through 7 P.M. Sustained winds may reach 40 miles an hour, with gusts up to 60.