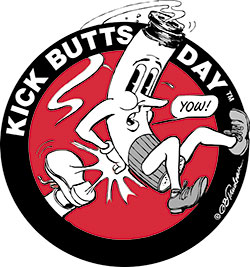 This is the 21st annual Kick Butts Day in Iowa as teenagers across the state unite to spread an anti-smoking message in their schools and communities.

Gustavo Torrez, director of youth advocacy for the Campaign for Tobacco-Free Kids, says events will range from small classroom activities about harmful ingredients in cigarettes to large rallies.

Torrez says, “Young people will advocate for issues that they’re seeing within their local community to help either reduce youth smoking rates or educate their community on the importance of smoke-free air laws.” Tobacco companies are spending almost 10-billion dollars a year to market their products nationwide, which Torrez says translates to almost 100-million dollars a year spent on tobacco marketing just in Iowa. Many of those ads, he says, center on Iowa teens.

The tobacco industry uses “outrageous” marketing tactics to target youth, Torrez says, including the introduction of sweet-flavored products like e-cigarettes and small cigars that come in flavors like gummy bear, cotton candy and watermelon.

“The national youth smoking rate is 15.7% and unfortunately, the high school smoking rate in Iowa is 18.1%,” Torrez says. “It really shows we have a lot of work that still needs to be done.” Some of the Iowa communities involved in today’s Kick Butts efforts include: Dubuque, Edgewood, Grundy Center, Keosauqua and Thornburg.

Torrez says tobacco use is the nation’s number-one preventable cause of death, killing more than 480,000 people and costing the nation 170 billion dollars in health care bills every year.