You are here: Home / Sports / Cyclones ready to focus on Iona in tournament opener 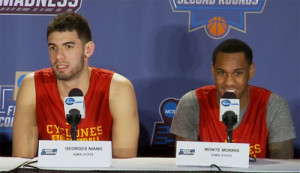 Georges Niang and Monte Morris talk to the media.

Fourth-seeded Iowa State is the first of three men’s teams to open the NCAA tourney today against 13th seeded Iona in Denver, Colorado.

Cyclone senior Georges Niang says success in the tournament comes down to one thing. “I think the biggest thing is you’ve just got to have focus, you can’t lack any focus in games like this,” Niang says. “… you really have to have 100 percent focus on what you are doing, their tendencies, really just to overcome all of that and come out with a win — and I think that is the biggest thing — you’ve got to have 100 percent focus, you can’t lack focus at any time in the game.”

Some pundits are saying the Cyclones are a good possibility for a first-round upset. “People are allowed to have their opinions, we know what we think in our circle and that is really all that matters,” according to Niang. “And I think this group of guys, we are just really hitting our peak and are locked in and that is a great thing with us going into March.”

ISU suffered a first-round upset last year and Niang says they couldn’t forget that if they tried. “I don’t think we can even run from last year — I feel people are constantly reminding us — where if I just want to watch cartoons on T-V I feel like that pops up. But I think the biggest thing is we remember the pain of last year and I don’t think focus is going to be lacking this game. We are taking these guys extremely seriously,” Niang says.

Monte Morris says he has recovered from his injury and is ready to play. He says the rugged Big 12 schedule has helped get them ready for the postseason.

He says it prepares you to play every night and the seven teams in the tournament speaks volumes about the toughness of the conference.

Coach Steve Prohm says he’s excited to be in Denver and ready to play in the tournament following his first regular season in Ames. “The season has been great, obviously there have been some highs and lows. If I said replacing Fred Hoiberg was easy, I’d be lying — it’s extremely difficult — but it is a challenge I wanted,” Prohm says. “Iowa State is an amazing, amazing place, Hilton Magic there’s nothing like it, it’s got to be one of the top five places to play college basketball. If you look at what our team has done — we’ve dealt with some adversity, suspensions, injuries — but I think we are in a good place right now.”

Prohm believes the tournament experience is an advantage for his team, even the losing experience of last year. He says the teams has probably talked about it among themselves, which he says brings them focus. “You do have guys on this team who have been to the Sweet 16, won tournament games. A couple of years ago I was a part of a team, we won tournament games. I think we have a lot experience here of winning, advancing and understanding what this stage is all about.”

The Cyclones open their fifth straight tournament at 1 p.m. today.