You are here: Home / Fires/Accidents/Disasters / Explosion injures two at elevator in Hinton

Two people were injured in an explosion at this elevator in Hinton.

Authorities are on the scene of a grain elevator explosion in Hinton. The blast occurred around 1 p.m. today at the Central Valley Ag Elevator. 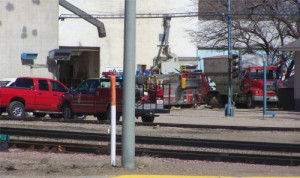 Van Otterloo couldn’t say if the explosion was caused by grain dust or something else.

“I have no idea, I have no idea,” the sheriff says. A resident says the explosion shook the entire community of Hinton. Highway 75 and County road C-60 through Hinton were closed and detours around town have been posted.

The state fire marshal has been contacted and will assist the Hinton Fire Department with the investigation.
(Reporting by Dennis Morris, KLEM, Le Mars)