You are here: Home / News / Fans turn out for NCAA basketball preview in Des Moines 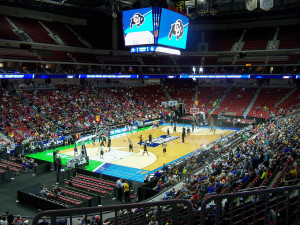 Fans turned out to see the tournament teams practice Wednesday in Des Moines.

Fans from across the country and across the state took advantage of the opportunity to see some of the top teams in the country practice as they prepared for their first-round NCAA Basketball Tournament games in Des Moines Wednesday.

Wells Fargo Arenas in Des Moines was buzzing with activity Wednesday as each of the 8 NCAA Tournament teams held an open practice.

Chris Williams of Ankeny says the chance to get inside the arena is something he couldn’t pass up and says it is a nice thing for the fans.

Dave Peters of Newton joined Williams and was interested in seeing the tournament overall top seed Kansas, and find out why they are so good. Peters says it’s fun to see the tournament come to Iowa. 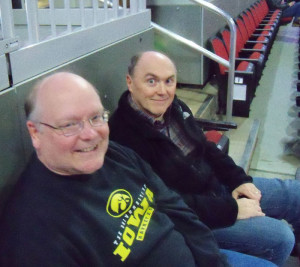 “I think this is a great event for Des Moines. Hopefully we’ll get it back in another couple of years if we get a chance,” Peters says.

Jeff Bland of Waukee wore a Kansas shirt and says he has been a fan of the team for some time. “I’m looking forward to seeing what their drills are and how they work,” he says, “And I really want an autograph.”

Gretchen Stanger was one of the adults leading a group of seven and eight year olds on a field trip from the Waukee YMCA.

“We’re very excited about this opportunity, the kids are supper pumped as well,” Stanger says. Michael Miner is one of the kids who couldn’t wait to get into the arena. “Yeah, I’ve been waiting all day to see this,” he says. While the kids were excited to see the teams practice, they haven’t quite been hit by a full dose of tournament fever. That was evident when they were asked if they had filled out tournament brackets. 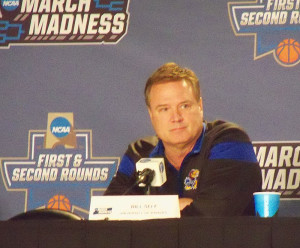 Kansas Coach Bill Self talks with the media Wednesday.

“No, I don’t, ” Miner says, and the others all nodded their head no. The kids do plan to follow one of the three state university teams in the tourney, but had differing opinions on which one was the best.

They said, “Go Hawkeyes,” “Go Cyclones” when asked about which team they favored.

Each of the teams got 40 minutes of practice on the new game floor in preparation for the start of the tournament today.