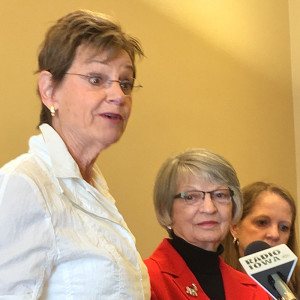 Two former Iowa lieutenant governors — one a Republican, the other a Democrat — have joined to publicly urge Senator Chuck Grassley to convene a Senate committee hearing to consider President Obama’s Supreme Court nominee.

Former Lieutenant Governor Sally Pederson, a Democrat, said the courts should be above politics.

“Senator Grassley, when he was a state legislator here in Iowa, at that time he believed we needed to keep politics out of the courts,” Pederson said during a statehouse news conference. “That’s why he supported going to a merit selection system.”

Before 1964, Iowa judges were elected by voters. After Justice Scalia died in February, Grassley said the American people should decide who the next justice is, by electing a new president. Former Lieutenant Governor Joy Corning, a Republican, said the people have already decided.

Corning and Pederson are leaders of “Justice, Not Politics” — a group that was active in Iowa’s recent judicial retention elections.